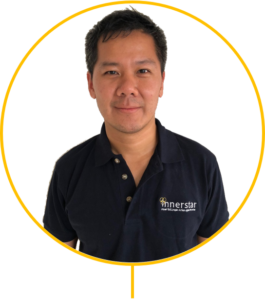 ‘For the last 18 years, I was like most Singaporeans, totally immersed with my job and running in a rat race with no finishing line in sight. I am very excited at the progress we have made with Innerstar so far and although I am still busy running, it is for a different cause.

It is not just me running the race, our progress will not be possible without the overwhelming support from our partners, volunteers and staff of the children’s homes. They are the heroes and heroines who work tirelessly to impart skills to our underprivileged youths. If this inspires you to act, do join us to ignite the potential in our future stars.’

Dickson’s career  in the engineering, strategy consulting, corporate finance and investment sectors spans 18 years. He first started as an engineering consultant in the UK and eventually decided to return to Singapore in 2005.

Dickson, a father of two, started doing volunteer work as part of his employer’s corporate social responsibility (CSR) programme. It was only after several years of volunteering that he was moved by the spirit of the underprivileged youths, that he started contributing more outside of work.

During one of the CSR outings with the youths from a home, one of the children told him that he had already been to the same attraction three times. That was when he realised that everyone can, and should do more for these youths, something with a more positive and lasting impact.

In 2016, Dickson reconnected with Michael Ferns Ong, a friend he has known for a few years. Michael shared the success of Equilibria’s E-Colors coaching concept in schools in the US. Having attended the programme himself, Dickson was convinced of the potential this learning approach would have on today’s youths.

That was how the idea of Innerstar was conceived, with an objective to prepare the youths for their future. On top of the education that they are already receiving, together with Innerstar’s high-impact programmes, the not-for-profit organisation’s aim is to help the youths realise their potential, develop relevant soft and hard skills, and build their confidence and be more resilient young men and women in the future.